“talhotblond” is the true story (and screen name) of a beautiful teenage vixen who uses Internet game rooms to lure men into her cyberspace web. When she discovers she’s been double crossed and lied to by one of her victims, she wants revenge and unleashes a fantasy online that escalates into real life murder… all because of a girl no one ever met in person. Drawing from exclusive access to Internet messages, secret notes and letters, as well as police evidence files and exclusive prison interviews, talhotblond details the horrific results of what can happen when people lie online… 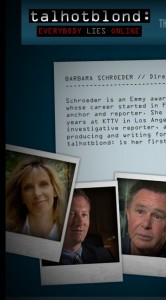 After viewing the documentary Kate and DeeAnna were struck with how precisely award-winning director,  Barbara Shroeder captured the online disinhibition effect– a term originally coined by John Suler of Rider University and referred to often in our trainings and workshops here at OTI/OCI Institute.  We asked Jean-Anne Sutherland, regular contributor to TILT Magazine through her column Reel Culture, to consider writing a feature article about the documentary.

Read about the film at the talhotblond website including viewing options.

We will be incorporating the film, review and director’s interview into an online workshop at OTI/OCI Institute.

We thank Barbara Shroeder for her willingness to be interviewed.

Kudos to John at onlinevents.co.uk for recording the CESL 4VCC  interview  in  Second Life.

talhotblond was recently made into a Lifetime movie with Courtney Cox making her directorial debut.

See our other Arts & Entertainment efforts! 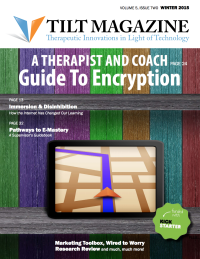