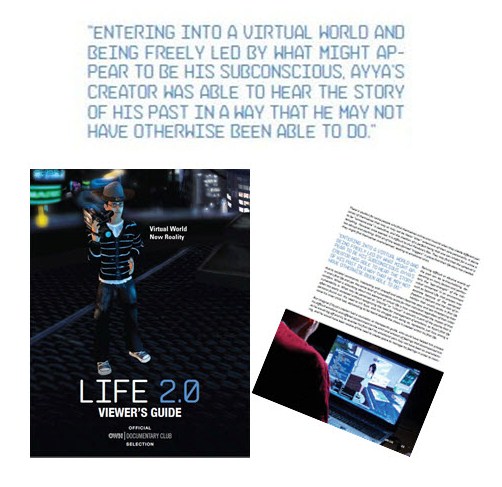 Life 2.0 is a documentary about the virtual world, Second Life. We became aware of the documentary when Jason Spingarn-Koff (Director, Producer, and Editor) contacted DeeAnna stating his film might be of interest to therapists. After attending screenings of the film (DeeAnna in NYC and Kate in London) we wrote an article about Life 2.0 for TILT Magazine, interviewed Jason Spingarn-Koff for a Counselor Education conference, and wrote an essay for the Viewer’s Guide that accompanies  the ro*co films educational purchase.

Read about the film at the Life 2.0 website including viewing options.

We have incorporated the film, Viewer’s Guide and Director interview into our Avatar Therapy Specialist Certificate course!

We thank Jason for the opportunity to be a part of his work!

Kudos to John at onlinevents.co.uk for recording the CESL 2VCC  interview  in  Second Life.