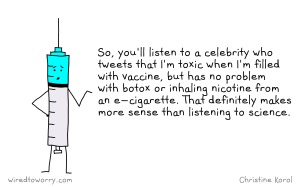 Recently, Jenny McCarthy asked her twitter followers to tell her the most important personality trait they looked for in a mate and to reply with the hashtag #jennyasks. She inadvertently caused a twitter storm. Here are a few examples of the flurry of angry tweets directed at the prominent anti-vaccinator:

Thomas Levenson @TomLevenson Mar 14 My ideal mate? Easy: someone who cares enough about our kids to protect them from wholly preventable diseases. #Jennyasks #vaccineswork

SchneiderSales @SchneiderReps Mar 14 #JennyAsks I’m gonna go with intelligence. As in, someone who understands some basic facts about medicine and immunology.

Evidence of increasing opposition to McCarthy and the anti-vaccine movement is easy to find online. There is an anti-anti-vax website that keeps a running tally of the number of deaths attributed to the anti-vaccine movement. As more measles outbreaks occur throughout North America journalists and medical researchers are quick to point the blame at McCarthy. The recent twitter backlash is just one more example that not everyone is buying her pseudoscience stance.

I am happy that there is debate on this issue and that social media gives non-celebrities a means to talk back and to counter misinformation. I am less happy about the tone of that debate. Although I do think that McCarthy is misguided, I would never agree that she doesn’t care about kids. I believe that she cares deeply and that is why she has been willing to face what has to be an overwhelming amount of hostility and criticism.

Stephen J. Hoffman from McMaster University has suggested that we follow celebrity medical advice for a variety of reasons, including cognitive dissonance and the halo effect (Hoffman, 2013). This is fine when the advice is good, such as Jamie Oliver’s campaign to improve nutrition in school lunch programs. However, it becomes problematic when the advice is based on misinformation or ideology rather than science or evidence. Hoffman suggests that professionals are able to counter harmful celebrity advice by educating our patients – whether it is about vaccinations, a questionable fad diet or unsafe exercise regimen.

In addition, as therapists we need to speak out on social media whenever we hear similarly harmful information. However, we need to remember that it is never necessary to make a point at the expense of someone else’s feelings or dignity. We have the opportunity to raise the level of discourse, stick to the facts and reject personal attacks that only serve to increase animosity between each side of a debate.

Christine Korol, Ph.D. is a cartoonist, psychologist in private practice in Calgary, Canada and the host/producer of a podcast on WiredToWorry.com that provides free online anxiety and stress reduction education videos.