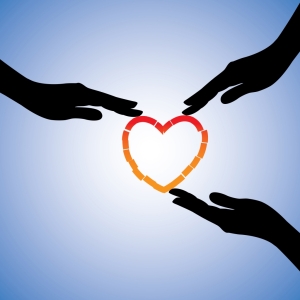 When I overcame dissociative issues and chronic depressions by seeing where they originated in the first place and how the false understandings of how relationships worked were stuck in my belief system, I found myself with a massive passion and desire to share my new found freedom and wholeness with the world.

In the beginning I started speaking in mental health seminars and I noticed that almost everyone in the room could relate to what I was speaking about when I talked about this ‘root belief system stuff’ that had resulted from the messages that I got from the actions of adults in my childhood. I was seeing people’s eyes pop open and they were mobbing me on the breaks. It was really validating to have so many people interested in talking to me in order to learn more about how I found this new freedom from depression and how I recovered my self-esteem.

I was in my mid-forties at this time and although I considered going back to school to become a therapist, I still had 3 kids at home and I lived way out in the country and couldn’t figure out how I would attend school if I did go back, so I decided to become a professional coach. Since I was already working in the mental health arena, I chose a well-known American psychiatrist who was the dean of a reputable coaching institute, as my coaching instructor, so I could learn how to coach without crossing over into therapy.

Through coach training I learned about internet marketing and began to read about how to get known through the internet. The prospect of reaching a worldwide audience was really exciting to me and armed with the confidence in my message that I was receiving as a mental health advocate and inspirational speaker, I started to take a few courses on how to get set up on the world wide web. I am not very techie. I barely knew how to cut and paste!

I was overwhelmed with all the possibilities but I worked hard every day and downloaded every free training that I came across until I found the people that I really wanted to learn from and then I took a few actual internet marketing courses. I determined from my studies that having a professional blog was the most effective way to present content and I took an online course with step by step instruction on starting a WordPress blog and I set up my website “Emerging from Broken.com”.

Although I had never considered myself “a writer” I started writing about my journey to wholeness: I wrote small consumable bite sized stories about how I discovered the false messages that were stuck in my brain because of the damage and trauma I had endured in my childhood. I wrote about sexual abuse, dissociative identity disorder, trauma and depression. I wrote about my life and the solutions that I had found that helped me overcome the trauma in my own life. I learned about key words, and facebook and a few other social media mediums and learned how to get my content found and how to share it and how to get it shared and I started to get comments on my blog!

That was four and a half years ago now. My blog grew and grew and within two years I was averaging 1000 legit comments a month and many of the comments were and still are over 2000 words. I invited some experts to guest post and I have invited people to share their own personal stories of healing. I have guest posted on other sites, and commented on other blogs related to my blog topics, all of which helped me to increase my reach, which was my primary goal in the beginning!

I also built a very successful private coaching practice through my blog. I have never advertised, or posted that I had an opening (not even in facebook) because I usually have a waiting list. I coach on the phone in Canada and the USA and on Skype in all other countries. 50% of my clients are American and the other 50% are from all over the world.

Today the blog itself has over 400 posts and over 33,000 comments! When Emerging from Broken was about 4 months old I started a facebook fan page and I have organically grown the following there to over 50,000 people, and the Emerging from Broken facebook page attracts an average of 100 new followers a day. I have become known as an expert on emotional healing and my website is read in 156 countries.

Recently I was contacted by award winning producer Robin Jay, with an invitation to be in her next self-help movie “The Secrets of the Keys” which is a prequel to her first movie “The Keeper of the Keys” staring Jack Canfield (co-creator of “Chicken Soup for the Soul” and author of “The Success Principles”), Marci Shimoff (author of “Happy for No Reason”), and Dr. John Gray (author of “Men are from Mars, Women are from Venus”). “The Keeper of the Keys” was the first funny self-help film. It won the Las Vegas International Film Festival Award for Best Independent Film and The INDIE Fest Award for Best Documentary.

Robin Jay signed me to co-star in the next “Key” movie “The Secrets of the Keys” as a featured “Key Expert”. I will be presenting on the key of Harmony. I will be co-staring in this film with icons of the personal development industry including Brian Tracy, Michael Beckwith, Dannion Brinkley (Author of “Saved by the Light”) John Assaraf, Gloria Loring, and will feature special guest don Miguel Ruiz, author of “The Four Agreements”. I am so excited and extremely honored to co-star with these amazing messengers in the field of self-help and personal development. I never imagined that my passion for reaching the world with my message of hope and healing would land me a movie deal!

Most Coaches and Therapists have a passion to help people. That’s why we do what we do and who doesn’t want to reach a wider audience? I saw a problem in the world and I believed I could contribute to the solution. I believed that I had unique information and I found a way to share it. I researched the best way to deliver this information and I learned how to do it. I celebrated the milestones along the way and I persevered through the tough times. There was a time when I thought that building this whole thing took too long but when stop and think about it honestly, it’s only been 4 and a half years and in that time have built a really high traffic website with hundreds of thousands of readers, I built a successful business, I have just published my first e-book “Emerging from Broken ~ The Beginning of Hope for Emotional Healing” and I have a movie deal. I think that is pretty awesome! Hope and persistence mixed with passion plus courage and the willingness to share information has been the recipe that got me on the road to the where I am today.

There is beauty (and success) on the other side of broken.

Click here to read the entire PDF version of the From Starting a Blog to landing a Movie Deal ~ all on the WWW article.