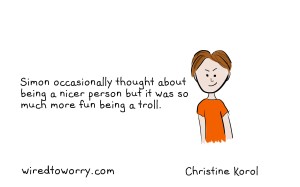 DO NOT FEED THE TROLLS! It’s hard to miss the warnings not to respond to those who post inflammatory comments in an attempt to wreak havoc in online forums, YouTube comments and, unbelievably, memorial sites. In the most extreme cases, some trolls have been identified and faced criminal charges for their reprehensible and threatening remarks. However, there are times when someone is simply expressing a strong, dissenting opinion, only to face inappropriate accusations of trolling.

Most of us who create online content struggle with how to encourage discussion while shutting down those who are posting comments that are abusive or offensive. This is where an ounce of prevention is important. Comment sections are subject to the broken windows theory of vandalism in neighborhoods. Social scientists studying vandalism found that neighborhoods that were well-maintained and cleaned up graffiti and vandalism promptly were more likely to prevent more serious crime and further destruction of property. Similarly, a solid policy on how you plan to moderate comments is likely to encourage serious and thoughtful comments because you are creating a community that makes it safe to participate in the discussion.

This article first appeared in the Summer 2013 issue of TILT Magazine ~ Therapeutic Innovations in Light of Technology.

Click here to read the entire PDF version of the Stopping Trolls Before They Start article.

Christine Korol, PhD, is a cartoonist psychologist in private practice in Calgary, Canada, and the host/producer of a podcast on WiredToWorry.com that provides free online anxiety and stress reduction education videos.