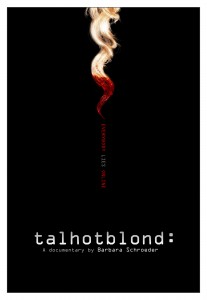 Watching Barbara Schroeder’s “Talhotblond: Everybody Lies Online” is like trying to NOT watch an accident site that you pass on the highway. Knowing the image won’t be pretty, you gawk anyway.

If this were a fictional, blockbuster film, we’d all leave the theatre saying, “That could never happen. Not really.” Sadly, this documentary details real events, extraordinary though they are. As the documentary’s website summates:

Talhotblond is the true story (and screen name) of a beautiful teenage vixen who uses Internet game rooms to lure men into her cyberspace web.

When she discovers she’s been double crossed and lied to by one of her victims, she wants revenge, and unleashes a fantasy online that escalates into real life murder – all because of a girl no one ever met in person.

Drawing from exclusive access to internet messages, secret notes and letters, as well as police evidence files and exclusive prison interviews, talhotblond details the horrific results of what can happen when people lie online.

This documentary offers essential lessons concerning cyberspace. It exposes the dark side of the internet; the presence of predators and liars, the potential addiction to excitement and secret-keeping and, the interactional dynamics of online communication. It is on this last point that I shall focus.

Click here to read the entire PDF version of the The Dark Side of the Internet: A Story of Disinhibition and Murder article.

Jean-Anne Sutherland is assistant professor of sociology at University of North Carolina, Wilmington, USA; one of her areas of research is sociology through film.