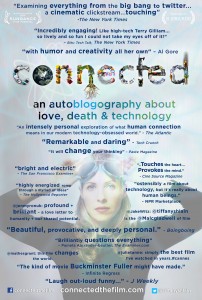 Tiffany Shlain’s new film Connected begins with a familiar scene: she’s enjoying dinner with an old friend and, while the company is good, the topics of conversation plentiful, she caves to her desires, sneaks into the women’s room, pulls out her cell and succumbs to texting and emailing. She asks, “What have I become?”

Indeed, what WE have become is the central concern fueling “Connected.” Shlain asks, “When did things begin moving so quickly?” What has the historical surge of technology meant for human beings? How has the increased interconnectedness of the world impacted us physically, socially and, globally? As her father, the author and surgeon Leonard Shlain once advised; when you want to know about something, go to the past and look for patterns. That’s what Tiffany Shlain does in this documentary exploring the internet, the synthesis of left and right brain hemispheres and, our increasingly interdependent world.

Woven throughout this documentary is the very personal account of Shlain’s father; his work, his life, and his eventual death to cancer while she was simultaneously experiencing a high-risk pregnancy and working to complete this film. Shlain relies on the writings of her father as she probes the modern era (check out his work here). Zipping across the time line, past the dinosaurs, after the earliest of humans with their fancy opposable thumbs, literacy was invented as a way to accumulate knowledge. It was right about here, Shlain argues, that a balance of power shifted. As we cruised into the age of enlightenment, science and reason stimulated the left hemisphere of our brains, leaving our right hemisphere, the one prone towards beauty and empathy, to play a less vital role in modernity (make sure you check out hers and her father’s interesting argument that patriarchy was born out of this brain hemisphere split).

For more information about the film visit https://www.onlinetherapyinstitute.com/connected-film/