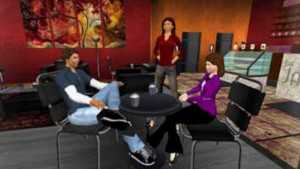 Imagine walking into a room paralyzed with fear to talk with someone. For Stacey, a young woman on the autism spectrum, that is a fear she faces every day. As a college student, Stacey attends her classes and returns home right after – never talking with anyone or making friends. She is too afraid to try and does not know what to say to start a conversation. For years, she has tried various social training groups, but still has never felt comfortable in social situations. Frustrated, anxious and alone, Stacey cannot make a connection with anyone.

The considerable fear and anxiety that those with autism experience in starting conversations is not the only core social cognition deficit. As John, a young man with autism, stated, “I wish I could enjoy being in social situations with others. It’s so hard for me to interact in a group of people – I just don’t understand what they’re thinking.” Those on the autism spectrum also have difficulty understanding social relationships, creating a social and emotional stall as teens enter young-adulthood and are forced to attempt independent living. As a result of their social struggles, most young adults with autism want to belong, but feel isolated limiting their contributions to society. Also concerning is the economic burden to the individual and society, which is becoming an ever present reality. Those on the autism spectrum often need to rely on others for financial support and have difficulty finding meaningful and lasting employment (Hendricks & Wehman, 2009).

Click here to read the entire PDF version of the Advancing Lives through the Science of Virtual Reality article.

Tandra Allen is project coordinator at The Center for BrainHealth at the University of Texas at Dallas.  Her work at the Center focuses on evaluating and treating social cognitive disorders in children and adults.  She has over 9 years clinical experience as a speech-language pathologist working and residing within Dallas, Texas.  Her work with the social cognition research study is featured on The Center for BrainHealth website: acenterforbrainhealth.org.