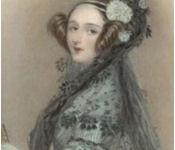 Ada Lovelace Day March 24th: An international day of blogging to raise awareness of the achievements of women in technology and science- I found this out today! So I thought I would add the OTI blog to the celebration!  As women co-founders of the Online Therapy Institute we are all about technology and how technology has impacted the field of mental health.

So who is Ada Lovelace? Ada Byron, Lady Lovelace, was born August Ada Byron on December 10, 1815  and is the daughter of the illustrious poet, Lord Byron.

When inspired Ada could be very focused and a mathematical taskmaster. Ada suggested writing a plan for how the engine might calculate Bernoulli numbers. This plan, is now regarded as the first “computer program.” A software language developed by the U.S. Department of Defense was named “Ada” in her honor in 1979.  Read more…

Thanks for your contribution, Ada! ~ perfect timing too since it is Women’s History Month! Check out more blog posts about Ada’s influence at BlogHer.