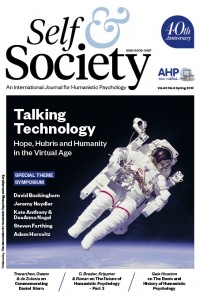 This summary was recently expanded into an article for Self & Society, Journal of the Association for Humanistic Psychology.

See the full article here: Appreciating Cyberculture and the Virtual Self Within by Kate Anthony and DeeAnna Nagel

You Don’t Know Me (dissociative anonymity)

The Internet offers apparent anonymity – if you wish, you can keep your identity hidden and use any name, either close to your own (e.g KatAnt) or very far away (e.g Xyz123).   For the most part, people only know what you choose to tell them about yourself.  When people have the opportunity to separate their actions from their real world and identity, they feel less vulnerable about opening up.  They also feel less need to be accountable for their actions – in fact; people might even convince themselves that those behaviors “aren’t me at all.” In psychology this is called “dissociation”.

You Can’t See Me (invisibility)

In many online environments other people cannot see you. As you browse through web sites, message boards, and even some chat rooms, people may not even know you are there at all.  In text communication such as e-mail, chat, blogs, and instant messaging, others may know a great deal about who you are. However, they still can’t see or hear you – and you can’t see or hear them. Even with everyone’s identity visible, the opportunity to be physically invisible amplifies the disinhibition effect. Invisibility gives people the courage to go places and do things that they otherwise wouldn’t, often with undesirable results.

In e-mail and message boards, communication is asynchronous. People don’t interact with each other in real time. Others may take minutes, hours, days, or even months to reply to something you say. Not having to deal with someone’s immediate reaction can be disinhibiting.  In e-mail and message boards, where there are delays in feedback, people’s train of thought may progress more steadily and quickly towards deeper expressions of what they are thinking and feeling in comparison to instantaneous communications.  Some people may even experience asynchronous communication as “running away” after posting a message that is personal, emotional, or hostile. It feels safe putting it “out there” where it can be left behind.

The absence of the visual and aural cues of face-to-face communication combined with text communication can have other interesting effects on people.  Reading another person’s message might be experienced as a voice within one’s head, as if that person magically has been inserted or “introjected” into one’s psyche, similar to how we hear a character when reading a book. In fact, consciously or unconsciously, we may even assign a visual image to what we think that person looks like and how that person behaves.  The online companion now becomes a character within personal mental experience of the world.  Online text communication can become the psychological tapestry in which a person’s mind weaves fantasy role-plays, usually unconsciously and with considerable disinhibition.

If we combine the feeling that all these conversations are going on inside our own heads with the nature of cyberspace as a means to escape real life, we get a slightly different force that magnifies disinhibition.  People may feel that the imaginary characters they “created” exist in a way that is quite separate from everyday life – a different realm altogether.  It is possible to split or “dissociate” online fiction from offline fact.  Once they turn off the computer and return to their daily routine, they believe they can leave that game and their game-identity behind. Why should they be held responsible for what happens in that make-believe play world that has nothing to do with reality?

While online others may not know a person’s status in the face-to-face world and it may not have as much impact as it does in that world.  In most cases, everyone on the Internet has an equal opportunity to voice him or herself. Although one’s status in the outside world ultimately may have some impact on one’s powers in cyberspace, what mostly determines your influence on others is your skill in communicating.  People are reluctant to say what they really think as they stand before an authority figure, but online, in what feels like a peer relationship – with the appearances of “authority” minimized – it is much easier to speak out and think  “Well, what can they do to me?”  As the Internet grows, with a seemingly endless potential for creating new environments, many people see themselves as independent-minded explorers. This atmosphere and philosophy contribute to the minimizing of authority.

For the online version see: http://www-usr.rider.edu/~suler/psycyber/disinhibit.html